The 10th anniversary of my first Crossfit competition just passed a short while ago. I was surprised when I realized how long I’ve been doing this – I had never really stopped to consider that. And then my thoughts turned to, why?

After thinking about it, I wanted to share my story of fitness, and why I still train like this after all these years.

As a kid in the 1970s, I was one of the few overweight kids and by few, I remember thinking I was 1 in 60!!! I was mostly inactive – a true nerd. I found BMX freestyle riding in the early ’80s and really got into it – I rode without taking a break or “off-season” for 25 years straight before I began to slow down and ride more irregularly. I still have never stopped, I just ride much less frequently now.

This build me decent aerobic endurance and great balance, but I never even thought of it as exercise! When I turned 30, I began to strength train both to prolong my bike career and since pros in other sports did it, it made sense to me to do the same. Of course, I wanted to look better naked too! I started lifting at the end of 1996, doing bodybuilding style training. I build an impressive home gym and trained there.

The nerdy side of me really got into researching strength training and nutrition. By 2000, I had read about and tried scores of protocols. Always on the lookout for something that might be better, I found kettlebell training and bodyweight mobility work to be very helpful. Both were just hitting the scene at that time. In 2002, I also found Crossfit, which was almost unheard of at the time.

There was only the original Crossfit gym in Santa Cruz, CA at that time. No affiliates (or “boxes”) yet, no certifications, no seminars. Just a website with a “workout of the day”. I could see this was something different right away. I quickly outfitted my home gym to be able to do all of the Crossfit exercises because in those early years, nearly all Crossfitters trained in their garages.

I liked how the workouts were simple, short, and potent. Working hard to get to “Rx’ed” weights and movements pushed my progress forward faster than anything had to that point, and my competitive side liked posting my results to the online blog along with the ~100 people around the world doing the same.

By 2004, I had become a pretty good Crossfit athlete for the time. The very first ever actual Crossfit competition was held in late 2003. It was the beginning of the annual CrossFit Championships, which were the precursor to the CrossFit Games. The 2003 event had a total of about 10 participants. I entered the 2004 event, by this time the event had tripled in size. You can read my account of it here, and the Crossfit Journal article about it here.

At this time, I was also taking vacation to go to Santa Cruz and train with Greg Glassman, the founder of CrossFit and his crew. I attended probably the first ever broadly announced CrossFit Level 1 Seminar in Santa Cruz in late 2004 or early 2005. 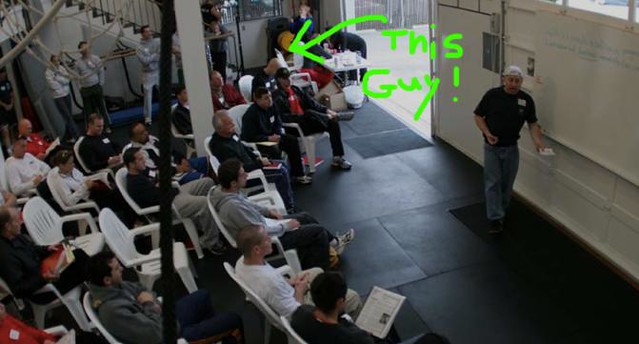 Over a decade later, I’m still training. My training thru those years has changed and evolved for sure. I’ve done several periods of focus where I’ve trained more like a specialist – O-lifting in 2008, gymnastic strength work for several years, a barbell focus period, and currently I’ve been on mostly an aerobic focus.

What is is about this style of exercise that’s kept my interest for so long, and more importantly to you, why might you still be doing this 10 years from now? I think there are a couple of reasons.

For one, it’s done as a group or community. Even if that’s an online community (like in the early years), being accountable to a group of friends is a strong motivator. In the past, people went to the big chain gyms and isolated themselves, headphones on and not talking to anyone. The early online community, then later the community of the gym have always kept me inspired.

Another reason is because Crossfit is task driven. Before, when people went to the commercial gyms, there were no specific tasks to achieve. You just tried to burn some calories or get a wicked pump. But with this new breed of fitness, there’s always a task set before you. And, when presented with a specific task, humans seem to have a much greater urge to get it done.

This is true whether it’s just completing the day’s workout or a longer term task like achieving a pullup. One thing that I know really keeps me going is that there are still tasks that I haven’t checked off the list yet. Crossfit is a very broad tent, so even if you get all the standard things mastered, there’s still more advanced gymnastic skills, heavier weights to be lifted, faster times yet, etc still out there.

Finally, and maybe most importantly, is that when it’s done correctly, it’s something that will actually improve your health and reduce your injury risk. This is both because of the attention given to proper form and also the results from regular mobility work.

As my mobility and form have improved thru the years, even though I am over a decade older, I have far fewer injuries or nagging joints. At your standard commercial gym, you can use atrocious form and no one will correct you, and few people work on mobility.

A final factor in health improvements is a gym’s programming. By programming, I mean the sequencing of exercises in the workout-of-the-day or “WOD” and more importantly, the planned sequencing of workouts across weeks and months. I’ll touch on this topic in a future email!

Hey, thanks for reading about me!