No one ever said change was easy.

Let’s take, for example, making a change to your exercise program in order to change your health and your life (I realize that’s a bit played out around here, but bear with me).

Sure, you’ve already done a lot to make this process successful. You took a big first step and joined us at CrossFit Portland!

You learned the basics and were assessed in Jump Start, you’re getting help from our knowledgable coaches in 201, and you have the support of an incredible community…but at the end of day hard work is still hard work.

Part of my role here at the gym involves keeping a regular schedule of contacts for all of our members, so that we can check-up on them periodically. This is useful for many reasons, including for generating a constant stream of member feedback.

More importantly, it allows us to help keep everyone on-track with their goals and ensures that they receive an additional level of personal attention outside of the group class setting.

I recently contacted one of our newer members to discuss their progress and help them work through some of the challenges that they have faced since they started a few months ago.

As we were chatting he explained how much he loved the gym, the classes, the coaches, etc. BUT (it was a big but) he was really struggling with the Olympic Lifts.

In other words, his expectations for himself and his progress were not in synch with the reality of the learning curve.

He had an idea of how long it should be taking him to learn how to do something properly, and he did not know how to deal with the fact that he was way off schedule.

The result? He became frustrated with himself and in his mind he began to turn every small mistake into a colossal failure.

In reality, the only thing he was failing at was allowing himself the space to make those mistakes, and was therefore unable to appreciate all the small successes that add up and result in progress.

It reminded me of my own experience as a fledgling Crossfitter. When I first started I was intensely uncomfortable at the gym for many months.

I never used to do anything unless I was 90% confident in my ability to do it, and Crossfit put me way outside of that comfort zone – and for way longer than I was accustomed to.

So what turned it around for me? Well, time for one thing, and more than a little stubbornness.

I also picked up some inspiration from a now classic CF video that featured James “OPT” Fitzgerald, the winner of the first Crossfit Games in 2007, as he talked about “getting comfortable with being uncomfortable”

Since we haven’t sent it out in a while, I thought this would be the perfect opportunity to introduce a new generation of Crossfit Portland members to his wisdom. 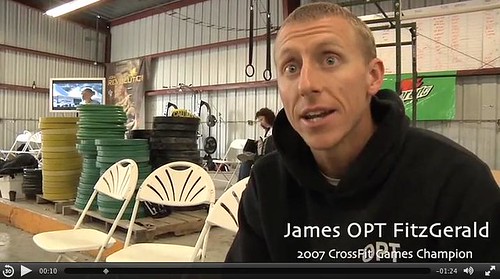 The truth is that whether it’s the physical discomfort of grinding through a particularly grueling workout, or the psychological discomfort that comes with trying to learn a new skill (especially one that doesn’t come easily, and oh crap, there are other people around to witness the struggle, and why can’t I just F-ing DO this?!), the lesson is the same:

If you can adopt a willingness to put yourself in situations that you know will be uncomfortable and allow yourself the space to work through them, you can overcome any challenge.

It’s not easy to do, but that’s sort of the point. If you’re serious about getting results, it’s worth considering that the mere fact that something is difficult could actually be an indication that you’re right on track, right where you’re supposed to be.

Plus, if you find yourself stuck or in need of that extra little bit of support, you can always feel free to contact me at any time! I’ll be happy to help get you back on track, or guide you to the resources you need to get there yourself.